Scary leviathans and legendary monstrosities have always captured our imagination whilst terrifying us at the same time, but while most of us have heard of bigfoot and the Loch Ness monster, there are some equally horrifying beasts down in Africa that are lying in wait out there in the dark.

This dwarf-like creature is rumoured to reside in the forests littering the African continent and it is believed that the ancestral spirits of the people in the Zaire region take their form.

They are viewed as a type of ghost, ones which haunt the woods if they have got unfinished business left with the living. It is believed that they lurk in the treetops in the darkest reaches of jungles in this area and they are widely considered to be malicious.

Grootslang is an Afrikaans word which means big, or great, snake, and it is also the name of a monster that lives in the Wonder Hole cave in South Africa’s Richtersveld area.

As the story tells it, the original Grootsland became too powerful so the gods split it into two species, the elephant and the snake, but some of the monsters escaped this fate and ended up reproducing. It can grow to as much as 60-foot-long and the cave it lives in is supposed to be full of diamonds but no one wants to check it out to make sure!

If you decide to Google images of this animal, make sure and do something to take your mind off of it before you try to go to sleep or you will have nightmares for sure. Watch something calming on Netflix, browse your social media for a little bit, or play a game of two of the great Bingo Australia has to offer! 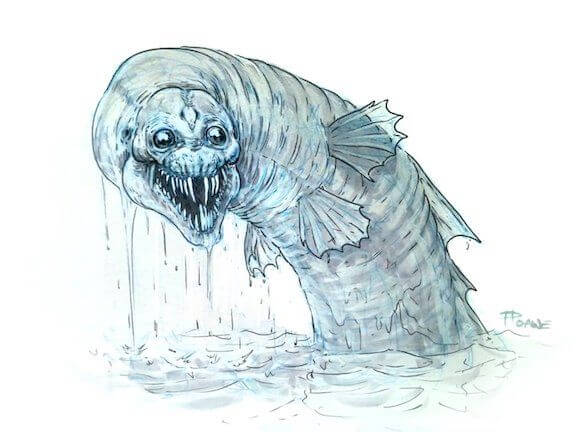 The Inkanyamba is an enormous, carnivorous, eel-like animal which appears in the legends of the Xhosa and Zulu in South Africa. They say it controls the weather and has huge fins and flippers. Although there are freshwater eels in South Africa that can reach sizes of much as six feet long, these pale in comparison to stories of the scary Inkanyamba.

These water spirits’ appearances shift depending on who is looking at them. Common descriptions see them as mermaid-type creatures, replete with long flowing hair and gapped teeth. They are thought to be able to cure disease, so the Duala, Bakweri, and other Sawa ethnic groups in Cameroon who believe in them hunt them. They are also thought to be able to communicate between the living realm and the spiritual one.

There have been eyewitness accounts and huge wounds to fuel stories of the Kongamato, originally from the explorers and native inhabitants of people living in the swamps of Angola, Conga, and Western Zambia, but no physical evidence of these bird-like creatures.

The bodies of their alleged victims were also never examined to confirm that the wounds they bore were from the mythical monster and most sightings have been attributed to a giant bat or misidentified bird.