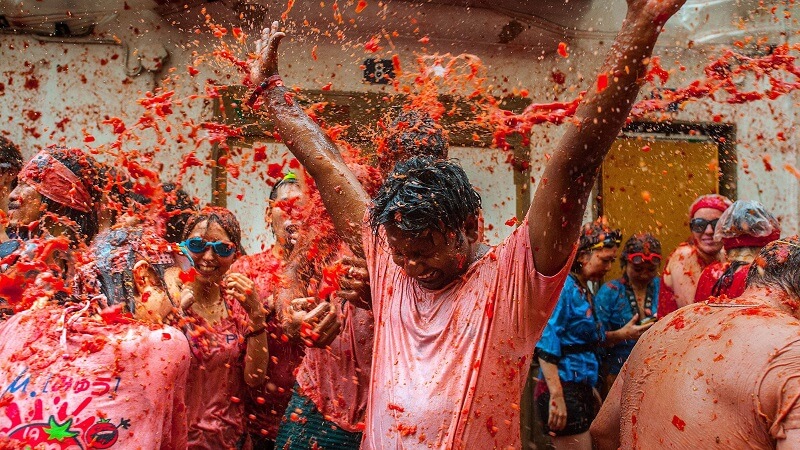 For anyone, travelling to a foreign place is bound to unearth some of the many wonders of the world, as well as some of the weirdest experiences imaginable.

Most of the time, they’re understandable even though they’re not exactly something that you would do out of your own free will.

As strange as they may be, each tradition represents its culture and should be admired and respected by those fortunate enough to experience it first-hand.

If you’ve ever watched a cartoon and seen a tomato thrown at someone, only to go “splat” and make a mess, you’ll know how appealing the idea can be. In Spain, the world’s biggest tomato fight La Tomatine does exactly that.

People come from all over the world to spend the last Wednesday in August throwing tomatoes at one another in the streets of Buñol.

For over 200 years, the last Monday in May has been the annual cheese-rolling competition.

The concept is simple, a giant wheel of Double Gloucester Cheese is rolled down Coopers Hill. People chase the wheel down the hill in an attempt to catch it, the person who does gets to keep it.

In Denmark, if you turn 25 and are still single, you’re in for a treat. It’s a tradition that your friends and family throw cinnamon at you all day.

And if that wasn’t bad enough, if you’re still single on your 30th birthday, you’ll be showered with pepper. So, best you start looking for your soulmate before that.

New Year’s Eve in Bolivia is every sweet tooth’s dream! The bakeries and pastry shops prepare some of the most delicious goods to usher in the new year, but with a twist.

Some of these treats have a coin in them. If you find the coin, you will be lucky in the new year.

On the last Sunday of November, Thailand hosts their annual monkey buffet festival that is believed to give luck to all that attend it.

Chefs spend a great deal of time preparing food, snacks, treats, fruits, and drinks to give to macaque monkeys. People even go as far as to dress like monkeys or even wear monkey masks.

6. Battle of the Oranges

Battaglia delle Arance, or Battle of Oranges, is a recreating of the historic fight between the ruling tyrant and the citizens of a small town in Italy.

However, instead of uses swords and guns, fresh oranges are used as weapons during the epic battle.

To Each Their Own

As each culture and country celebrates their diversity such as playing Bingo Australia, we remember the historic events that played a part in the rather unusual tradition.

From throwing tomatoes and oranges to punishing singles by throwing cinnamon at them, they’ve become a part of annual traditions and will continue to entertain and inform generations to come.