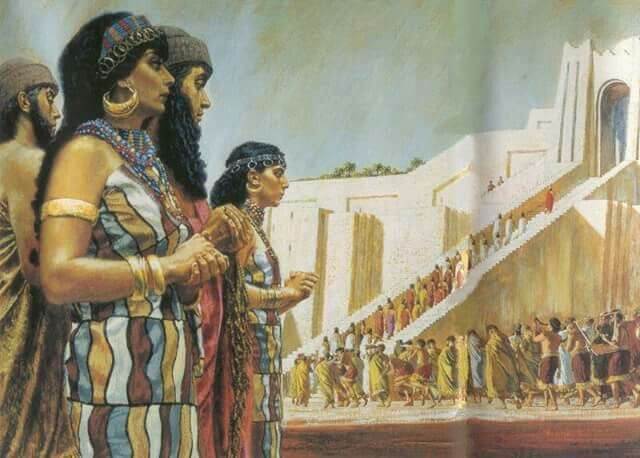 https://www.ausvegas.xyz – The Sumerians are often credited as being the first true civilisation of all time.

Starting out in the Fertile Crescent in what is today’s Middle East, the Sumerians were well-known across the region for their advanced technology, their understanding of mathematics, and the development of a unique and independent writing system that still shocks historians to this day due to its complexity.

They also had one of the first organised regions in recorded history, with a pantheon of gods and goddesses, many of them the providing the original inspiration for later regions and mythologies.

Here we will explore some of the more prominent deities that could be found within the Sumerian belief system.

Enki was an extremely popular god that was most associated with water, and he was worshipped throughout much of Sumer and Akkad. He was represented with fish swimming and streams of water, and there a close relationship between the Euphrates and Tigris rivers and Enki.

There were more than a few settlements that had a temple of some kind devoted to worshipping Enki, and his popularity remained strong for centuries.

As one of the most important gods to the ancient Sumerians, Enlil was worshipped far and wide. He was one of the older gods in the pantheon, and was the father of such others as Inanna, Ninurta, and Utu, among many others.

He is often described as the supreme lord of the other gods and was closely associated with the allocation of land by the kinds at the time.

After the Sumerians fell to the conquests of the Akkadians, it was important for the two cultures to merge and create lasting peace. One way they accomplished this was through the mutual worship of Inanna, considered as one of the most prominent deities of the time. In fact, she became the primary goddess when it came to overall worship, and the largest cities at the time were often centred around temples built in her honour.

She represented a number of traits, including fertility and war, and was seen as responsible for procreation. Uruk, which is considered by many to be among the oldest settlements in the world, was largely created as a show of devotion to this goddess.

Known as Anu by the Akkadians, An was the supreme god of gods in the ancient Sumerian pantheon. They believed that he took control of the heavens when they split away from the earth, after which he became the leader of the other gods.

Not much information is known about An, but it’s believed that he was among the oldest gods ever created, and that he formed the basis for many of the patron gods that would be adopted by later belief systems, far different from our modern world of smartphones and AU sports betting guides.

Utu was revered as the sun god, who was believed to bring the sun into the sky every day and provide light for everyone below.

The son of Nanna and Inanna Utu was also commonly known as the god of justice and truth, as he was able to see everything that occurred during his travels across the sky.